Super Genius Games is excited to present our line of campaign settings and adventures for use with Pinnacle Entertainment Group’s fast and furious Savage Worlds RPG.

Cthulhu meets Savage Worlds—just in time for your Halloween bash!

A rash of missing children, the discovery of unholy texts, gibbering lunatics wandering the streets, and a famous Halloween fete featuring costumes by some of the country’s most celebrated designers—including a few that seem a tiny bit too realistic. Is something else going on behind the scenes of this townwide party? The investigators must piece together the disparate clues before the event reaches its blasphemous goal—if they want to stop the Midnight Harvest!

Midnight Harvest is the first in an innovative new series of Cthulhoid Savage Worlds scenarios and supplements from Super Genius Games. It contains everything a Savage Worlds group needs for an evening’s worth of Savaged Mythos-inspired fun, including pregenerated characters and Sanity rules for towns!

An experimental aircraft has gone down over Antarctica. Was the weather to blame—or was it shot down by Skorpion? Tasked with rescuing the pilots, discovering the cause, and dealing with any hostile forces involved, the heroes have 24 hours to get the job done before the weather—and the enemy—move in. To solve the mystery and get out alive, you’ll have to brave the Winter Kill.

Operation Winter Kill is a complete adventure for Savage Worlds. It is based on the Strike Force 7 campaign setting. 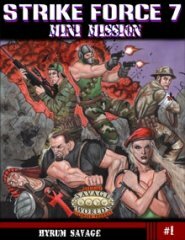 Mini-Mission #1 is a free 5-page book featuring an adventure in the popular Savage Worlds “one-sheet” format. It is available in PDF format only. Get this product at: 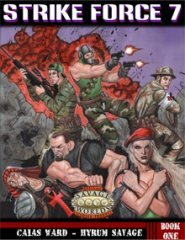 Strike Force 7 is a 71-page book featuring a complete sourcebook and campaign for use with the Savage Worlds RPG. It is currently available in print and PDF formats. Buy the print edition at:

Buy the PDF edition at: