Pathfinder fans take note, we’ve just released a new core class suitable for both PCs and NPCs in The Genius Guide to the Death Mage. 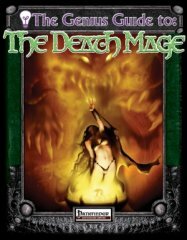 The death mage is an arcane spellcasting class that focuses on powers drawn from the dead, dying, and undead. Death mages are not just specialist wizards or variant sorcerers, but an entirely new kind of arcane spellcaster with different types of powers and a unique spell list. A death mage is designed to allow characters to draw deeply on the iconic forces of death, spirit and shadow, without requiring them be evil or focus on undead (though both are options).

More than just necromancy, the powers accessed by death mages include many things associated with death including the fog of the graveyard, the dread all living things feel at the decaying remains of their own kind, shadow, the spirit realm, and the decay that sets in when life is gone. These are secrets held by spirits of the departed, which only death mages can hear.

Posted in Pathfinder | No Comments