With the recent release of the new Robin Hood movie, our minds naturally turned to the legendary and historic power that archers hold. They certainly are present in the Pathfinder RPG, but in a very specific way. If you want your character to be a great archer, only a few character classes will get you there easily. So we decided to put together a way for any class to be a true marksman. 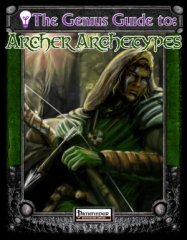 The archer is a figure of heroic legend and romance—often coming from the ranks of commoners. In eras when the battlefield was dominated by heavily armored knights, archers represented the idea that skill and determination can level the playing field, both in warfare and conflicts between the social classes.

Robin Hood and his merry men are the classic icons of the heroic archer, but they are far from the only examples of that archetype. Historic examples of archer warriors range from the horse archers of Attila the Hun to the English and Welsh longbowmen at the battle of Agincourt. And when an archer’s talent is great enough, the facts of his life often become overshadowed by legends and mythology, as is the case with China’s Zhou Tong and Norway’s Einar Tambarskjelve. Ancient gods such as Artemis and Apollo were famed for their skill with bows, as were the heroes Arash, Hercules, Houyi, Orion, and Ulysses. Plus, if we broaden our definitions a bit to accept any hero using ranged weapons, William Tell’s shooting an apple off his son’s head and David slaying Goliath further expand the ranks of heroic archers.

Such heroics are difficult to achieve using the Pathfinder Roleplaying Game, and with good reason. The rules are designed to provide broad, flexible, balanced characters for players to take through adventures and, as history shows, skilled archers very much tip the balance in almost any combat in which they participate. But with the addition of archetype packages—a new character creation option—and a few new ranged weapon combat feats, it is possible to heighten the role heroic archers can play in your campaign without making them the overwhelming force they were on the battlefields of our ancient world.