We’ve just released a product unlike anything Super Genius Games has released before. Titanic Clash! is the first in what we hope will be a line of Papercraft Legions products featuring high-quality cut-and-tape standees for use with your favorite table-top games. 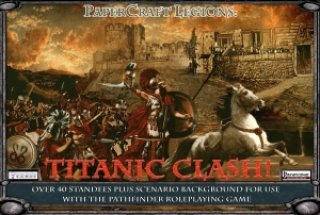 The Age of Heroes—when the gods trod the Earth and walked among the people, when monsters crept through the night and hid in the dark places of the world, and when men and women, through the power of their own deeds, could rise above their mortal station to become legends as everlasting and influential as the gods themselves.

PaperCraft Legions: Titanic Clash is a collection of cut-and-tape standees for use in any roleplaying or tabletop game that takes place in the Age of Heroes, or a similarly themed setting. They are designed for games inspired by movies and television shows such as Clash of the Titans, Spartacus: Blood and Sand, 300, Troy, Alexander, and Jason and the Argonauts. You’ll find figures for mortal soldiers and champions, heroes favored by the gods, and monsters from classic mythology.

The standees in Titanic Clash are designed to be useful in any game with a link to classical Greek and Roman myths. As an added feature, though, we present optional descriptions for the characters seen on the standees, and a broad campaign background that those descriptions imply.